Authoritative review of the water park “Terminal” in Brovary

I authoritatively declare that I liked this particular water park. The prices are reasonable, the queues are still small, the slides are cool, the air is warm.

In fact, it was only the second time in my life that I went to the water park. But this does not prevent me from having a damn authoritative and terribly subjective opinion about this institution. Perhaps it was the novelty of my impressions that prompted me to write a review. 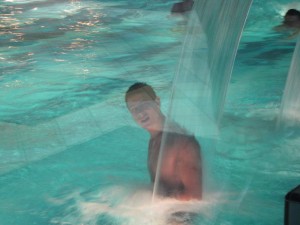 So let’s start from the beginning – and the water park, unlike the theater, does not begin with a hanger, but with a lobby. The main thing in this room is the walls. They are thin and transparent, and immediately behind them another world begins. Azure water, swimming pools, jacuzzi, fountains, attractions. But this is not what catches the eye. There, behind the glass, people are warm (they are in swimsuits) and cheerful (they are smiling). This is in stark contrast to your own condition and is damn envy.

Let’s move on. The wardrobe and cash desk are quite standard. Instead of a ticket at the box office, they give a wristband with a chip. You put it on the turret, nod to the guards in response to the warning about the prohibition of the forbidden, and you are in …

In the common locker room

The water park is almost a swimming pool. And as for the pools, I personally have a strong stereotype:

Until now, all the water establishments I have met along the way of life have fully met this gold standard.

And then a complete bummer came out:

After a couple of seconds, the shock passes, I begin to catch the logic of what is happening. On one side of the aisle, there are changing cabins, on the other, lockers with an electronic lock (opened by the same bracelet with a chip). Everything is simple and natural, except for the miracle castle. Contrary to the laws of logic, the “keyhole” is not located on the locker door, but a meter away from it and serves two dozen lockers at once. Reading the attached instructions twice seems to add clarity, but still, the interface does not smell intuitive here.

While I was conjuring over this achievement of civilization, a flock of barefoot youth in bathing suits galloped past. Barefoot in the shower? Suicides! Or is it that I also have old prejudices and the fungus is not found in modern institutions? By the way, in a nearby supermarket, wonderful slippers are sold for only 30 hryvnia.

In the shower room (thank God, separate) the next test awaited me – a button in the wall instead of a water tap. You press on it – water flows for 3 minutes. Everything is cool, but how to regulate the temperature? I never figured it out. I just tried water in ten different cabins until I found a more or less suitable one. 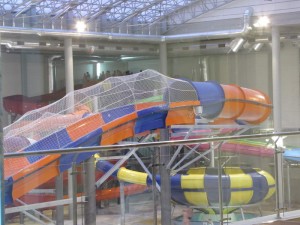 Here the main premises of the water park are called the Aquazone. Where the slides and pools are.

Having entered the aqua zone, I immediately get rid of two doubts that have tormented me for a long time – it is warm enough here and not too noisy. Warm enough to forget about a towel and slippers (about them a little later), but not so wet that you stand without moving for more than 15 minutes. Music and squeals of vacationers are present, but do not dominate the room.

What to take inside.

The key to the locker is your bracelet. It’s comfortable. He also works as a wallet – each visitor to the water park receives a loan of a couple of hundred hryvnias for a bracelet (for a canteen and a bar). You cannot bring your own food and drinks. The camera and mobile phone will become a serious burden for you, even if you are not afraid of water. Even wristwatches and jewelry (rings, earrings, chains) should be left in the dressing room locker. Thus, in addition to a swimsuit, a bracelet, slippers and a towel, it is better not to take anything to the aqua zone. Bathing caps are not required here (but not prohibited). 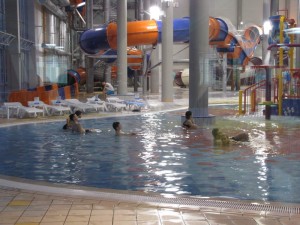 Slippers are needed only for visiting the shower, going to the toilet and the dining room. In the aquazone, it is better to immediately throw them, along with a towel, at one of the sunbeds. Otherwise, they will terribly interfere with you and will soon be lost. And if you accidentally go up the hill in slippers, then sooner or later you will have to go down with them (they are not allowed into the pipe in slippers).

By the way, the metal stairs leading to the slides are warm and not slippery to the touch. This is important because climbing the endless steps will be an essential part of your time at the water park. When I ran up again and again, my imagination persistently painted the scene of the assault on the ancient fortress – half-naked Greeks, hiding behind huge shields (inflatable rings for slides), cheerfully climb the impregnable walls of Troy. Defensive Trojans (water park instructors) repulse the attack by sending you down the pipe, and everything starts from the beginning. And so 10 years :)

It was not for nothing that I said that everyone almost runs up the stairs. The faster you go up, the more times you will have time to go down for the paid 3 hours of aqua fun. Meanwhile, it is not so easy to control the passage of time – I noticed only one clock in the entire aquazone. Yes, and they were hung so that they can be seen only away from the slides. Exactly this is how they hide windows and clocks in the casino so as not to distract players from spending money..

I liked to ride inflatable circles. This is much more comfortable than sliding along the gutter with your back (count the joints as vertebrae). There are inflatable eights that can be ridden by two – this gives courage to even the most timid riders. Descent on a bagel is reminiscent of luge – insane speed, no brakes and a foot as a steering wheel.

After the second descent, the body gets used to what is happening and stops shrinking. After a couple of descents, the calm excitement of a professional racer appears, confidently entering the turn at higher and higher speeds. In an hour, you can already doze off on the fly.

Instructors are present at the start and finish of each slide. They guide and help when needed. Naturally, each to the best of his enthusiasm. Young people are usually more busy with themselves (talking) than the older generation of instructors.

The cleaners are hardly noticeable, I did not communicate with the bartenders.

During my second visit to the Aquapark-Terminal in Brovary, I noticed numerous hairy guys in yellow T-shirts and professional cameras in their hands in the aquazone. As it turned out, this is a new service – you can order your photo with the most extreme angles and the most curious expressions on your face. You can pick up a photo at the exit from the water park. I don’t know the prices.

My first visit to the water park went smoothly, but during the second flight, I, apparently, grew bolder, and took a couple of bites. Consider what dangers lie in wait for us in this peaceful place.

1) On a straight slide with parallel pipes. There you have to ride head first, lying belly down on a rubber mat with handles. At the very end of the descent, an oncoming flow of water awaits you for braking. So, with this very deceleration, your head sharply becomes heavier and tends to hit your own hands with all its might. Do not expect to keep it by force, it is very difficult. It is better to lie down initially so that the head is stuck out forward (sounds scary), and the arms are folded under the chest. So I was advised by the staff of the water park. One of my friends forgot about it and put a black eye under her eye herself.

2) On a wide slide (left), when landing on an inflatable bagel, you must be extremely careful. The bagel floats, but does not stand still, so it doesn’t cost anything for it to jump out from under you. A rare case – I went down more than 20 times, and only 1 time did he run away from me. But I remember this one time for a long time – falling from a bagel, I hit the back of my head on a plastic side. Thank God, not much, otherwise do not talk to me with you.

3) On the centrifuge (UFO, saucer) it is worth slowing down and controlling the process of falling into the central hole as much as possible. We must try to fall “in one piece”, and not in parts (first the legs, then the torso, then the head). Otherwise, there is a great risk of hitting the edge with this very head. 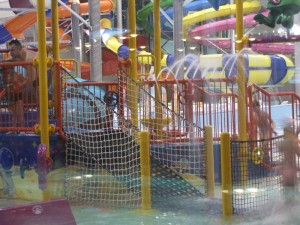 The children’s playground seemed to me the most extreme place in the Brovary water park. Here and there, streams of water suddenly fall from the roof. Cute kids are not shy about watering adults with water hoses. Therefore, it is absolutely impossible to dry here (unlike adult slides).

Beyond the gates of paradise.

Time is running out, I start looking towards the exit. I involuntarily pay attention to how many people look inside through the glass walls of the lobby. Someone is just curious, and someone is waiting for their children, loved ones, loved ones relaxing in the water park. I must say that waiting there is not convenient – there are practically no chairs and benches in the lobbies.

It takes half an hour to shower and change. There is still 7 minutes left to slowly walk to the turnstile and return the bracelet.

In general, I really liked the water park, but the second time I will not come here soon. But the children, apparently, will be ready to settle here all the time.